Just 3 months after reaching all-time highs, we find ourselves on the brink of an official bear market with the all of the major indexes getting absolutely crushed last week culminating with the S&P dropping 2.7% on Christmas Eve.  Talk about getting a lump coal in your stocking.  Let’s talk about what happened, what may happen next, and what you should be thinking about right now.

What on earth just happened?

After reaching all-time highs in October, we started to slide a bit after people started with recession talk again when the yield curve inverted, oil prices started to really tank, and we got an interest rate hike from the Fed during their last meeting.  Things really came to a head last week when Donald Trump decided to partially shut down the government to get funding for the border wall and the selling really started.   Then on Sunday, for some reason, Steve Mnuchin did this: 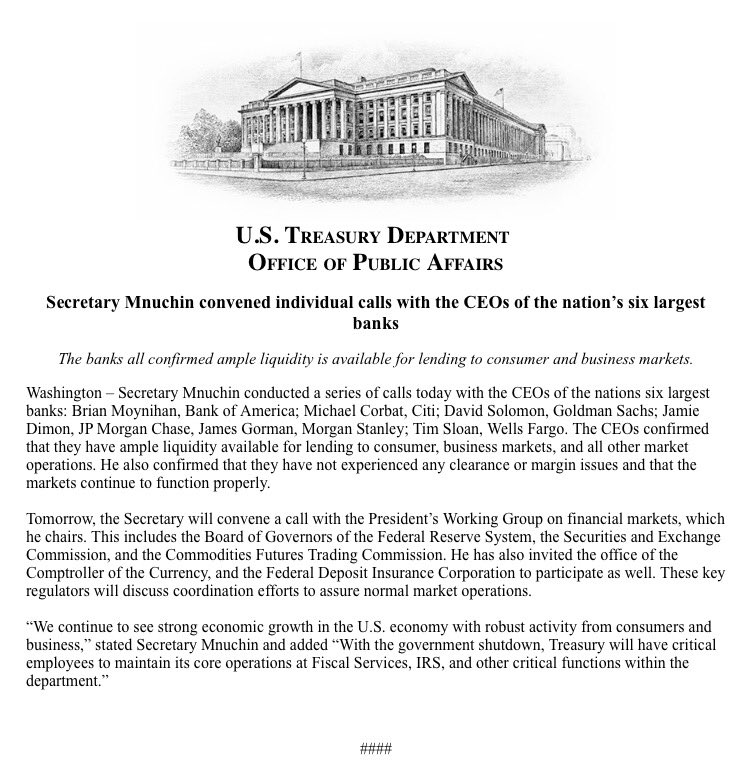 The Atlantic said “Imagine having a runny nose, itchy eyes, congestion, and a sore throat, and your doctor telling you that you shouldn’t worry about cancer—she consulted her colleagues and they’re certain it is not cancer, and if it were, they could fight it.”  This was not a great move.  The market cratered on Christmas Eve in its worst showing on that day in history.  So now, here we are, on the brink of an official bear market.

That’s not great.  But besides some of the political stuff, what is different between now and the all-time highs we were at 2 months ago?  What changed?

Besides the price of oil sliding a bit and a 25 basis point rate hike everyone knew was coming we’re in the same basic economic environment as we were in October.  We’re living this cartoon to a certain degree: 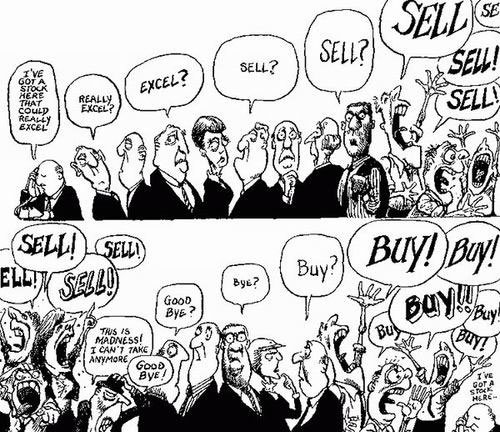 OK, so what does this mean for me and my investments for next year?

The million dollar question.  Is this the beginning of a prolonged bear market?  Or is this just a brief pause in a much longer secular bull market?  We saw big corrections in 2016, 1998, and 1990 and the market resumed it’s upward trajectory the next year.  We won’t know what environment we are in now until much later.  The best thing you can do is to mentally prepare for the different outcomes that may come.  Morgan Housel said that “Every past decline looks like an opportunity, every future decline looks like a risk”.

OK, if we can’t predict what’s going to happen next year, what should I be thinking about today?

Things can get worse in the short term

Not to rain on anyone’s parade, but if this is the start of a prolonged bear market we could just be getting started on the downside.  The average bear market loss peak-to-trough is -38.7%   BUT…

For those of you with longer time horizons, it’s tough now but future returns after terrible quarters can be pretty good.

For those of you with cash on the sidelines and longer time horizons, check out this trick Josh Brown does during corrections to help with your mental state (written in 2015 so the stock prices are different):

“I pick five or six of the best stocks in America that I’ve missed out on – the ones that have always bothered me. Everyone has their names. A contemporary list might include Netflix, Amazon, Facebook, Disney, Celgene, Starbucks, Chipotle, Goldman Sachs, etc.

Now I go to my quotes screen to see where they’re currently trading and I come up with utterly absurd prices at which I would buy them (all price quotes as of 8:15 am pre-market):

You get the idea. These are discounts of 20% and beyond to the already discounted levels the stocks are going to open at this morning. They’re absurd prices. But that’s the whole point. Market panics give you a crack at absurd prices.”

Are you hovering over the “sell” button?  The best way to get through a bear market is to have a portfolio you can stick with during the ups and downs.  We use a pretty unique program called Riskalyze to help us design portfolios our clients can stick with.  You can see a quick video about that process here.

Unfortunately, this is not the first or last time we will be going through a rough period in the markets.  Remember why you are investing in the first place, know you have a plan for whatever happens next, and stick with it.

Don’t have one?  We can help.  Schedule a call here.

What To Do With A Cash Gift